The students were very creative and the jury decided to award 15 prizes, including several in the artistic category. A photo work, "The world through their eyes", was reproduced by the Switcher Foundation on a t-shirt and offered to all the students present.

A student from Rousseau High School read the message he wrote for the decision-makers who will be in Rio from June 20 to 22. Here is an excerpt:

"Unfortunately, the amalgam is too often made between development and growth. It always takes more! While we claim to want to act to preserve our planet and future generations, we always refer to the same indicators and work within the same economic system. Before concluding, "Prove our will! Let's stop the general hypocrisy and face the problems Let's stop the summits and conferences where we decide ... to decide later. We can certainly, but today prove that we want it and act: YES WE WANT!"

The Director-General of the United Nations Office in Geneva, Mr. Kassym-Jomart Tokayev, was present throughout the ceremony. Yann Arthus-Bertrand and his GoodPlanet Foundation sent a video message, UNEP, the Swiss Mission, the Geneva Department of Public Education, Culture and Sport, as well as the International School of Geneva were also present to deliver a message to the students.

All participants were delighted with the welcome, "this ceremony will remain in our hearts and unforgettable in our minds big and small" said the message from one particular teacher from the Drize secondary school.

The exhibition of the best artwork and photos from Yann Arthus-Bertrand took place at the UN from 1 to 15 June (see below).

We thank the "J'aime ma planète" association for the sponsoring of the prizes, as well as Plan Vert, Caran d'Ache, the Switcher Foundation and UBS.

« The world through their eyes »
Two students from the Nations Campus, International School of Geneva

The 4 year primary classes of Châtonnaye, Middes and Torny-le-Grand studied photos of Yann Arthus-Bertrand in class and realized their own images in their own environment.
PPT presentation of their work (French)
Commentaries of the PPT (French)

Analysis of the impact of toilet paper on the environment.
Presentation of the work by the class for the awards ceremony

"we produce to consume"
Pupil from the Châtaigneraie Campus, International School of Geneva

"A breeze of energy!"
Pupil from the Châtaigneraie Campus, International School of Geneva

"i-Possibilities"
Pupil from the Châtaigneraie Campus, International School of Geneva

"VATN"
Pupil from the Châtaigneraie Campus, International School of Geneva 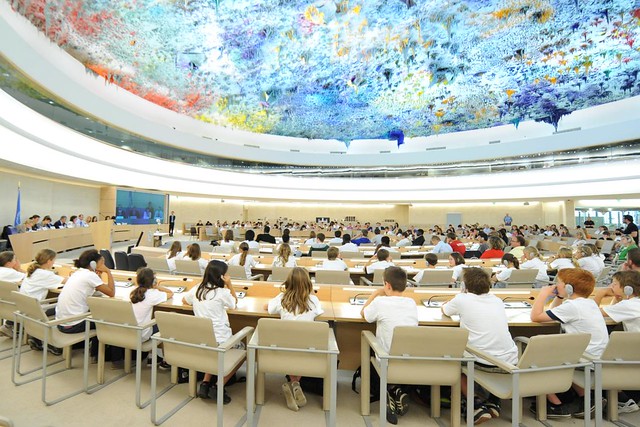